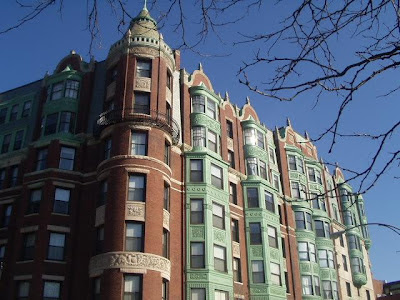 Here's a shot of the Charlesgate Hotel, Boston's version of NYC's The Dakota (location for the film "Rosemary's Baby" and the spot where John Lennon was murdered).

This creepy building is a hotbed of alleged paranormal activity since it was original built in 1891. Formerly a Boston University and Emerson dorm, the site is the source of a slew of reports from students (from the '70s to the mid-'90s) claiming the building is haunted.

I'm currently working on a book project called "Ghosts of Boston: Haunts of the Hub" where I'm exploring paranormal activity at a handful of college dorms/schools scattered throughout New England. In the book, I also examine alleged paranormal activity at a handful of site-specific locations, including the Emerson Cutler Majestic and the Omni Parker House.

The writing project will cover everything from my old dorm room on the 4th Floor of Boston University's Shelton Hall (rumor is Eugene O'Neill and his wife Carlotta continue to haunt the Writers' Corridor) to the refurbished Charlesgate Hotel in the Back Bay.

The Charlesgate Hotel (coupled with The Barnes Mansion) is now an upscale condo building. Click here for details.
Posted by Sam Baltrusis at 12:03 AM