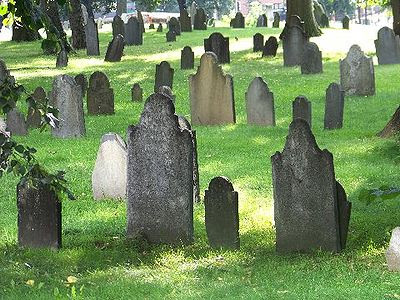 If you believe the Freedom Trail is the end all of Boston history, think again. There are a slew of hidden haunts from Boston’s not-so-Puritanical past in one the oldest city parks in the United States. Yep, the Boston Common is chock full of ghosts, graves and gallows.

While Salem is known for its witch trials, the Boston Common held public hangings until 1769 on an old elm tree in the western side of the Common. The tree was later replaced with gallows, or a wooden contraption used for public executions until 1817.

Compared to Salem, there were only three witchcraft-related hangings which included Margaret Jones, Anne Hibbins and Goody Glover. Boston's so-called witch hysteria lasted over a 40-year period. All three alleged witches were later exonerated and Glover, who is considered a Catholic martyr, has a bar/restaurant named after her on Salem Street in the North End.

Mary Dyer, who was targeted by the Boston Puritans for being a Quaker and is immortalized as a bronze statue in front of the Massachusetts State House, was one of several women persecuted in the Boston Common because of their religious beliefs.

There’s a plaque honoring the spot of the Great Elm and alleged site of the public hangings, which was destroyed in 1876 and honored with a hard-to-find historic marker near the Frog Pond on the western side of the Common.

On the Boylston Street side of the park is the Central Burying Ground, the final resting place of artist Gilbert Stuart and composer William Billings. In the 1830s, a pedestrian mall was constructed, which eliminated about 15 feet of the southern part of the cemetery.

During 1895, human remains of 900 to 1,100 bodies were uncovered and there’s a mass grave for these unmarked graves in the northeast side of the burial ground. There’s also the spooky story of a 13-year-old girl, rumored to haunt the cemetery.

The Boston Common's more infamous ghost story involves two women, rumored to be sisters, who are dressed in 1830s-style garb and have been spotted walking arm-in-arm or sitting on a bench. When visitors try to approach the ghostly duo, the apparitions mysteriously disappear.

Boston Haunts Tip: Many of the buildings surrounding the Boston Common are home to alleged  paranormal activity, including the third floor of the recently refurbished Omni Park House Hotel, at 60 School St., the Boston Athenaeum at 10 ½ School St. and Emerson’s Cutler Majestic Theater located at 219 Tremont.
Posted by Sam Baltrusis at 1:30 AM