Upcoming 'Ghosts of Boston: Haunts of the Hub' book signings

Based on my recently taped stint as Boston's paranormal expert on the Biography Channel's "Haunted Encounters: Face to Face," spirits are serious business. The on-camera interview, which was shot in front of the Central Burying Ground and facing what I called Boston's “haunted corridor” near the corner of Boylston and Tremont Streets, explored the residual energy, or psychic imprint, left over from the 1897 gas-line explosion. The segment is tentatively slotted to air Friday, November 23 on the Bio Channel.

The book "Ghosts of Boston: Haunts of the Hub" was released on Tuesday, Sept. 11. Thanks to the initial buzz, there are a slew of book signings and events scheduled for September/October 2012. Here are a few highlights:

To book the author, email him directly or contact publicist Katie Parry at the History Press. Check back for updates.
Posted by Sam Baltrusis at 9:17 PM No comments:

Based on the freaked-out expression on Haunted Boston tour guide Jeffrey Doucette's face, he looked as if he had just seen a ghost.

“You're not going to believe what just happened,” he said, rushing into the Omni Parker House's mezzanine watering hole, Parker's Bar, one Sunday evening after giving a ghost tour to a group of high school kids from Vermont. “As I was telling a story at the site of the hanging elm, I could tell something was up,” he recalled, packing up his lantern and sitting down in a cozy table near the bar's fireplace. “The chaperone is waving at me as if 'Jeff, you need to look at this' and she shows me her camera. I literally couldn't believe what I was seeing. In the photo, it looks like seven nooses hanging from the trees in the area near what was the hanging tree.”

Doucette, featured in the book Ghosts of Boston: Haunts of the Hub, will be at the 7-8 p.m. Thursday, September 27 book-signing event at the Brookline Public Library, 361 Washington St. in Brookline Village. The ghostlore expert was also a guest panelist at the book's spirited launch event at the Old South Meeting House on Tuesday, Sept. 18.

A four-year Haunted Boston veteran and a popular tour guide among out-of-town visitors thanks to his distinct South Boston accent, Doucette said he was a skeptic for years until he had a few close encounters of the paranormal kind while trudging through the tour's haunted sites scattered throughout the Boston Common and Beacon Hill. Now, he's a full-fledged believer.

“I was like, 'what the f***?' Let's get out of here,” he said, referring to the noose photo taken earlier in the evening and creepy pictures of demonic, red-colored orbs shot in the Central Burying Ground. “It literally freaked me out. This year, I've seen a lot of orbs, but nothing like what I just saw. I'm not sure if [the spirits] heard me talking about the interview I'm having with you, but they really showed their colors tonight. The ghosts in the Boston Common were out in full force and they were screaming.”

Click here to order the book Ghosts of Boston: Haunts of the Hub for the complete story.
Posted by Sam Baltrusis at 11:04 PM No comments:

Do you believe in Ghosts?

The "Ghosts of Boston: Haunts of the Hub" spirit squad was out in full force at the Tuesday, Sept. 18 book launch event at the Old South Meeting House. Adam Berry, who was on assignment with Syfy's Ghost Hunters in Upstate New York, drove in and joined the festivities at what is considered the epicenter of the country's Freedom of Speech movement. Ben Franklin was baptized in this building. It's also the birthplace of the American Revolution.

Scott Trainito and Mike Baker, the lead investigators of Para-Boston, kicked off the panel discussion and gave a scientific spin on alleged paranormal activity in the historic building and chatted about their approach to investigating. Their findings? The Para-Boston team did record an EVP (electromagnetic voice phenomenon) of a male voice saying, "Who's there?" There were also first-hand accounts of chains rattling in the lower area of the OSMH and a bizarre recording anomaly coming from the building's steeple.

Any evidence of the so-called Revolutionary War-era horse spirit lingering in the building? Naaaay .. or is it "neigghhhh." Of course, the EVP could have been an undead Mr. Ed. However, several visitors to the building have reported smelling hay and one woman who recently tied the knot in the Old South Meeting House said she had a close encounter with the horse spirit.

For the record, the Redcoats ransacked the former church during the Revolutionary War and used it as a horse stable and riding school for British soldiers. George Washington walked by the building during the late 1700s and was extremely unhappy with how the Brits desecrated this important landmark.

Jeffrey Doucette, a tour guide with Haunted Boston, discussed his experiences with the supernatural in the Boston Common and Adam Berry, who was escorted to the stage by Cambridge Haunts tour guide and performer Ashley Michelle, chatted about a close encounter with a school spirit at his Boston Conservatory dorm.

Over the weekend, "Ghosts of Boston: Haunts of the Hub" ranked #42 on Amazon's Folklore & Mythology best seller list. Click here to check out the buzzworthy book.

Posted by Sam Baltrusis at 10:17 PM No comments:

Long before Adam Berry snagged top prize as a paranormal investigator-in-training on Syfy's Ghost Hunters Academy, he confronted a school spirit haunting his college dormitory. “I thought that I had a ghost in my dorm room at the Boston Conservatory during my junior year,” Berry said, adding that he felt a presence physically hold him down, a phenomenon known as sleep paralysis.

Berry, featured in the book Ghosts of Boston: Haunts of the Hub, will be on assignment with the TAPS (The Atlantic Paranormal Society) team in Upstate New York. However, he plans to make the trek to Boston (fingers crossed) in support of the book's launch event 7-8:30 p.m. Tuesday, Sept. 18. Click here for tickets.

“I was freaked out and thought there was something in my room. My mother told me to take some dirt from the front of my dorm and throw it in the cemetery. We did and dumped the dirt in the old cemetery near Emerson [Central Burying Ground] to get rid of the spirit,” he remarked. “After that, I never felt intimidated being in that dorm.”

As far as the ghostlore surrounding campus hauntings, Berry believes it's a rite of passage. “Going to college is like going to summer camp, but with classes,” he mused. “You have stories that are told from generation to generation on a college campus. And universities like Harvard have dorms that are hundreds of years old so it makes sense that these spooky ghost stories continue to be told. Also, seniors love to scare freshmen.”

Berry, who founded the Provincetown Paranormal Research Society (PPRS) in 2006 after graduating from college, said his ghostly encounter in Boston coupled with a supernatural experience in Gettysburg, Pennsylvania helped fuel his interest in the spirit realm. “Boston is one of my favorite cities in the world and obviously has something going on,” the twenty-nine-year-old said. “Because of the history, there are so many interesting places that could be investigated. It was one of the biggest seaports in the country and had tons of activity during the Revolutionary and Civil Wars. There must be spirits left behind, mulling about and checking out the status of the community they built way back when.”

During his four-year stint at the Conservatory, the paranormal investigator who was originally from Muscle Shoals, Alabama said he fell in love with the Hub. “Because of Boston's rich history and the singular fact that it was the cornerstone of the American Revolution makes it a city that is truly one of a kind,” he said. “Why would anyone want to leave … even after they're dead?”

Click here to order the book Ghosts of Boston: Haunts of the Hub for the complete story.
Posted by Sam Baltrusis at 3:14 PM No comments:

Common Haunts: So, there's something about Mary ... 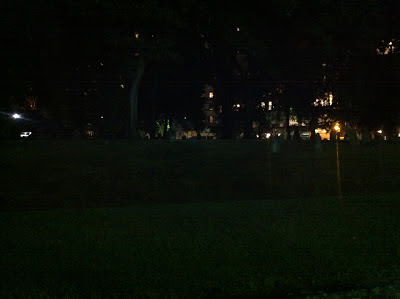 While researching a Halloween-themed story called Haunted Hot Spots for STUFF magazine, I started spending hours in the Boston Common. I've always felt a strong magnetic pull to the site of the Great Elm, also known as the hanging tree. There was also an inexplicable interest in the Central Burying Ground and, one night while walking by the old cemetery, I noticed a young female figure wearing what looked like a hospital gown and standing by a tree. I looked back and she was gone.

At this point, I didn't know about the Matthew Rutger legend dating back to the 1970s. Like me, he saw a ghost at the old cemetery and I remember shivering in the beauty and the madness of the moment. Somehow, I felt her pain.

I call her Mary.

Read the full story in the upcoming book, "Ghosts of Boston: Haunts of the Hub," hitting shelves on Tuesday, Sept. 11. Click here to pre-order on Amazon.com.