The Provincetown ParaCon's hottest ticket? The Saturday night May 13 paranormal investigation, sponsored by The 555 Paranormal Productions by psychic Brandie Wells, at the historic U.U. Meetinghouse. 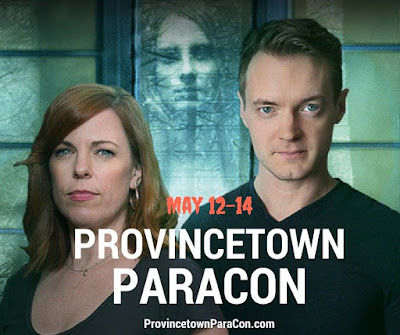 Author Sam Baltrusis and psychic Brandie Wells will welcome you into this historic venue and give you a brief Paranormal 101 introduction prepping you for this unbelievable location in Cape Cod's Provincetown. Space is limited. Groupon HERE. 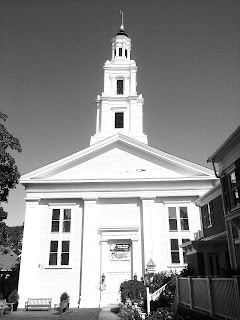 Used as an infirmary during the flu epidemic of 1918, the Unitarian Universalist Meetinghouse (UUMH) was built in 1847 and is reportedly one of Provincetown’s more paranormally active locations. “People say that they’ve seen a woman in full Colonial garb walking across the sanctuary,” explained Adam Berry, formerly of Ghost Hunters. “They also hear singing when no one is there. When I was doing a fundraiser in the building one night, I heard distinct footsteps walk across the church’s pulpit.”

Other sources, like Uncommon Sense Media, have echoed Berry’s observation that UUMH is indeed active. “It meets all the criteria for being a haunted house because it's an old building and it has a creepy history. Like all haunted houses, people report seeing ‘something’ moving from the corner of their eye and also ‘felt a presence’ when alone.”

Formerly called the Universalist Church of the Redeemer, the striking white structure located at 236 Commercial St. was the crown jewel of Provincetown’s spiritual community. “Every detail of the beautiful Christopher Wren tower and the facade with its dignified simplicity with the great spruces on either side, make an unforgettable picture,” reported New Beacon in 1962. “Inside the church is the same beautiful sanctuary, just as it was in 1847 when it was built, with the same priceless Sandwich glass chandeliers.”

The structure’s acoustics are to die for and oddly accentuate the church’s more notorious spirits: singing specters.

The Unitarian Universalist Meetinghouse is "notable for having a ghostly choir," confirmed Cape Encounters. According to the account, the building’s historian was alone downstairs in the meetinghouse when she claimed to have heard the ghost group singing. "She waited ten minutes before daring to walk upstairs to confirm the source. When she reached the top of the stairs, she found the second floor quiet and empty." The church's former sexton, Oscar, had a face-to-face to encounter with the ghostly choir. "His memory included recollections of looking up and seeing the ensemble dressed in coats,” Cape Encounters continued.

So, why a ghost choir? One theory is that the ghosts of the Commercial Street haunt are somehow tied to the Great Pandemic of 1918. The plague started in Boston on August 27 when several sailors were stricken with a deadly flu virus. In three days, there were 58 cases in Boston and it quickly spread to 2,000 people within two weeks. "This epidemic started about four weeks ago, and has developed so rapidly that the camp is demoralized and all ordinary work is held up till it has passed,” reported a beleaguered physician from nearby Camp Devens. “These men start with what appears to be an ordinary attack of influenza and when brought to the hospital they very rapidly develop the most viscous type of pneumonia that has ever been seen. Two hours after admission they have the mahogany spots over the cheekbones, and a few hours later you can begin to see the cyanosis extending from their ears and spreading all over the face. It is only a matter of a few hours then until death comes, and it is simply a struggle for air until they suffocate. It is horrible.”

The killer flu quickly traveled to Provincetown and locals felt under siege. “In 1918 came the flu epidemic. Then Provincetown put on a strange face,” wrote Mary Heaton Vorse in A Time and the Town: A Provincetown Chronicle. “Everyone went around masked with an antiseptic cloth. It made one feel that the days of pestilence in the Middle Ages had returned. People were stricken so fast that hospitals couldn’t care for them. A hospital was improvised in the Universalist Church.”

In Provincetown, more than 829 cases of the deadly “Spanish flu” killed more than 45,000 people in Massachusetts over a four-month period. According to Vorse, at least 25 died at the Universalist church. Eyewitnesses who have encountered the ghost choir said they’ve seen around two dozen apparitions in this ghostly chorus. Based on reports, it’s possible that these spirited songbirds are a residual haunting from the Pandemic flu era.

Oddly, the numbers of those who died at the church correlate to the spirits participating in the ghost-choir ensemble.
Posted by Sam Baltrusis at 9:00 PM